The Biography of Rudi Zimmerer.

How I overcame my life struggles? Imagine my situation: I was a 22-year-old student of electrical engineering involved in a big struggle with my university teachers because I had won a case against one of them so that he had to undo my last examination. All of the teachers were very upset with me and gave me a hard time everywhere. Also, I was the founder of a new political party that had won the last election of the student parliament. Also, I had epilepsy, a paralyzed face and many other diseases related to the stress. I was quite ill.
On a summer Sunday, a day with beautiful weather and a blue sky, I went to the emergency doctor to receive my daily injection of Reparil. A very young, overtired doctor came to assist me. While he was attempting to open the ampoule, it broke. This made me nervous. Again, he opened two new ampoules and had to mix the contents of the two together. His hands were shaking, so he spilled 1/3 of the solution from one ampoule on the floor. I became scared, remembering that it’s possible to die if the injection is given wrong. Nevertheless, he managed to fill the syringe. He tried to inject my vein, but missed and tried it again and again. I became very angry and protested against his treatment. Suddenly, he made the injection in my vein very fast. I lost consciousness, saw my life passing by in very colorful slides, and then saw my body from the perspective of a fly on the ceiling. I was clinically dead. I remembered my life up to this point. I had lived a live full of sorrow; I was abused and beaten by my parents, my brother, and my sister, who hated me, nearly every day. When I left the house, children older and stronger than me liked to beat me up because my family was an atheist. I could hardly learn my mother language, German, and was a stutterer because of my parents’ habit of beating me for every mistake that I made, even when I was innocent. Therefore, I went to a low-grade school and struggled to learn any languages.

At age16, I apprenticed as a telecommunications installer and worked hard for 12 hours per day. I struggled with my masters because they were unjust, which I could not stand without protesting like crazy. I was scared to approach girls. My parents complained about me and always said, “You are stupid and lazy.”

I tried to think positively about everything that happened to me but got epilepsy around this time, and I could not understand life. I complained all the time and was on the edge of suicide nearly every day. Nevertheless, I had one goal since I was a child: to become an engineer. I went to school again but failed in the first examination, so I had to take an additional oral examination in four subjects, but finally passed as a D student. I could then study at university.

When the doctors revived me, I knew that the way I was living was entirely wrong, because I did not enjoy my life. I then chose for my life to equal the sum of all my happiness.

I finished my studies as an A student, and with the support of the government, I did my advanced studies in another city, far away from my parents. Here, I studied psychology in addition to engineering and started going to self-experimentation groups. Unfortunately, these groups were not much help, so I tried body and feelings-orientated therapy, combined with meditation.

I worked as an engineer and designed the navigation control unit for a satellite. My girlfriend was pregnant, but we lost the child. This was one of the worst setbacks/tragedies of my life, and also the springboard to God. It seems like it would be very depressing for anyone, but the opposite became true for me. We all go through nightmares, but please don’t remain stuck in them; keep going!

Within two and half years of starting the therapy, I was able to escape my sorrow and became healthy. Even more, I was awakened, or got the kundalini and had, as an atheist, contact with God. The kundalini is an indwelling energy in the lowest part of our body, which, when awakened, rises upward and brings us many benefits. Since this occurrence, I can feel bliss in every situation; I have only to repeat the name of God. I eventually began to give therapy as trained therapist.

After one year, I had such a great longing for meditation that I went on long retreats, where I meditated full-time, first in Germany and then in India with Mata Amritanandamayi. Over 15 years, I spent 12 years in retreats and lived as a monk. Almost all of my time was spent happily in silence. I lived in India for 10 years.
I was forced to leave the ashram due to an accident and then moved to Thailand. The accident even saved my life, because I was with a Tibetan acupuncturist when a tsunami struck India. Otherwise I could have been one of the 250,000 victims.

My spine was in very bad condition because the lowest disk was broken and the next two disks had been protruded outside, in addition to having nerve channel inflammation and strong scoliosis. Seated meditation was no longer possible for me. Nevertheless, I told everybody that my spine would be better than ever before within three years and that my scoliosis would be cured. Nobody believed me, as usual, and yet it came true.

In Thailand, I learned many techniques to improve life, health and to gain more spirituality, from both eastern and western sources. I fell in love with a beautiful young Thai girl who was addicted to gambling. We struggled very much to stop her addiction, and we are still together 9 years later. Through her, I learned compassion and forgiveness, regardless what she did. I earn my money on the stock market and have lived in Krabi/Thailand for 10 years. Joel Bauer has trained over 600 of the top Speakers in the world. 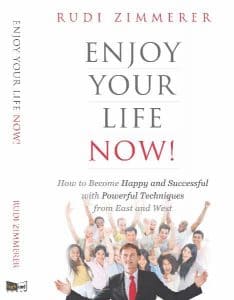 I have coached a large number of people and have already prevented 5 suicides. I have recognized again and again the same mistakes that prevent people from living a happy life. Most people underestimate the influence of their subconscious minds, which control their whole lives. I have therefore written a book that teaches how to live a happy and successful life, first in German and then translated into English, which you read here.
Never give up, and enjoy your life now; we never know what comes next!